If you’re thinking about creating video content—I applaud you. You’re on the right track to making some positive changes in your business and/or personal brand. Video content is the powerhouse of marketing tools, and there’s no sign it’s slowing down anytime soon.

In fact, Wyzowl found that 87% of people would like to see more video from brands in 2019—that’s well over half! With over 1 billion users on youtube alone, you stand to gain a lot from producing and sharing video content with your audience.

But as with most things, creating video is easier said than done. As a video content creator myself, I understand that video has a considerable learning curve as opposed to other content. It also takes more time to make and if you want to hire a helping hand, it’s not cheap. With all these factors in play, most will begin their video content journey attempting to film themselves.

Here’s where I come in, I don’t want you to waste your precious time with trial and error. There are some things you can get right the first time to avoid filming footage that isn’t desirable. When it comes to video, a lot of the work is done before you hit record and if you do your due diligence you’ll save yourself a lot of time!

RELATED:  Video Tips | 4 Things To Check BEFORE You Hit Record

Here are the best camera settings for filming DSLR Video.

Before we begin I want to give you some explanations of common terms used in video creation. You can refer to this key as you go through the rest of the post!

Video Resolution– The amount of pixels in a given dimension. Usually referred to as width x height.

Frame rate– The frequency at which frames are displayed

Shutter Speed– The length of time your shutter is open

Aperture-A space in which light passes through a lens

The first thing you will want to consider is your video resolution. Most DSLR cameras have 640 x 480, 1280 x 720 and 1920 x 1080 available to choose from. In most cases you’ll want to go with the highest resolution available to you which will be 1920 x 1080. 1080 is HD quality and will give you the most pixels (i.e. detail) in your final images. Some of the newer DSLR cameras have 4k video resolution available which is becoming increasingly popular. While 4k will give you a crazy amount of detail (because of the vast number of pixels), working with 4k video during the editing process requires way more effort and so I do not recommend it for beginners who just want to create simple videos.

Once you’ve decided on your resolution you’ll want to decide on your frame rate. Most DSLR cameras that have video frame rate capabilities of 24fps, 30fps and 60fps. When you start to work through the menu on your camera, you’ll notice that some frame rates aren’t available with some resolutions. For example, 60fps isn’t usually available in 1080, only in 720. Some cameras do have 60fps in 1080, just depends on the camera.

The higher the frame rate number, the more frames are captured. You might be thinking great, i’ll just go with the highest one so I have the most frames, but that’s not always the best choice. The vast majority of the videos you see online or even on TV are usually filmed in one of two frame rates, 24fps or 30fps. This is because it is more pleasing to our eyes. We actually don’t like the way 60fps (or higher) looks straight out of the camera. If you’ve ever looked at it, it kinda has a funky “old school camcorder” look to it. Higher frame rates are generally reserved for slow motion shots, so unless you are planning to do slow motion. Stick with 24fps or 30fps.

Wondering which one is better between 24fps or 30fps? The truth is it’s totally up to you! They both produce great looking video in the end, it’s your creative eye that will decide which one you like best. In my opinion, 24fps will give you a more film/cinematic look while 30fps gives you a more digital video look. I personally prefer to film in 24fps.

When it comes to your shutter speed, it should be set to roughly double your frame rate. I like to say that frame rate and shutter speed are in a sort of marriage together. If you set your shutter speed too high (like 100 or higher) the movement in your video will look choppy and unnatural. If you set it too low then the movement in your video will look blurry and like you didn’t focus properly. But the goldilocks zone of roughly double your frame rate is the perfect setting to get the results of natural movement in the final product.

Camera Setting #4- Auto, Or anywhere between f/4 to f/22 if you want most things in the frame  to be in focus.

The aperture setting tells your camera how much light to let through the lens. Depending on the lens you have, it can range from f/1.2 to f/22. The lower the number, the more light comes through (brighter image), the higher the number more light is blocked (darker image). The good news is that nothing is set in stone when it comes to your aperture setting. You do have some creative freedom on what you decide to do, but it’s important to know that less of the frame will be in focus the lower you set your aperture. Setting your aperture low is one way to achieve that blurry background everyone loves. A low aperture is anything 2.8 or less. If you want more of the frame to be on focus then you’ll want to aim between f/4 and f/22.

RELATED: How To Get That Blurry Background In your Photos + Videos

Camera Setting #5- Auto, or as low as possible while still maintaining a well exposed image.

The ISO setting tells your camera how sensitive the sensor should be to incoming light. A higher number equals more sensitivity and a brighter image while a lower number means less sensitivity and a darker image. There is also a lot of information out there about “noise” or distortion at certain ISO settings but for the purpose of this article I won’t get into that. Generally speaking, you should aim to set your ISO as low as possible while still maintaining a well exposed image.

Camera Setting #4– Auto, Or anywhere between f/4 to f/22 if you want most things in the frame  to be in focus.

Camera Setting #5– Auto, or as low as possible while still maintaining a well exposed image.

Now go out there and make that awesome video content. Your audience is waiting! 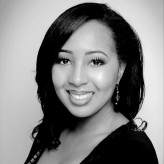 Olivia J is a video producer, writer, and director specializing in corporate video, events, documentaries and film. To see some of her work visit oliviaj.me